Readers — Here’s hhsfkfesiy
a piece about businesses that cater to kids and make a policy of not allowing adults who are child-free Â to enter. The examples are Legoland outside of Boston, which we have discussed previously, as well as a local kiddie farm (not that they raise kiddies, they raise pettable animals) and the ubiquitous Chuck E. Cheese.

What dismays me about the ban on child-free adults is how grateful some parents seem to be, even though, a generation ago, I really don’t think there even WERE such bans. So the bans are actually serving to DE-NORMALIZE the idea of kids around adults. Reporter Michael Hartwell interviewed a lot of parents for his piece (including me), and not all are in favor of the ban. But this one is:

Barbara Maciel Lando, a mother of two from Leominster, likes policies like the one at Davis Farmland.

“Adults without children are never a good sign in a children’s play land area. It makes an easy target for someone to snatch a child and run,” said Lando, 45.

She said child predators are a serious risk today.

“You nor I wouldn’t know if there was a registered offender or a drug trafficker where children are,” she said. “You never know. You cannot trust anyone these days. Even a priest can’t be trusted.”

You can guess who’s one of the others. And I especially disagree with the general manager of the Legoland in Sommerville, MA, who explains the ban this way:

“It’s really about an experience. We’re looking to create a safe, fun environment for families and kids,” said Gilmore. “We don’t apologize for it at all.”

No apologies for suggesting that if a child is in the same museum as an adult withoutÂ a child, the child is automatically in danger? Does he think generations of children have been UNsafe at the Museum of Natural History and, frankly, pretty much every other museum on the planet? Does he think there are rooms in his museum where kids could be carted off, unnoticed by all? Really, what DOES he think? Rapes in the bathroom? Kidnappings? Murder? It’s another one of those cases where a vague “something could happen!” allows parents to fill in the blank and suddenly we are all terrified of a 20-year-old Lego fan standing next to our 5 year old.

These bans are not good for kids because they are not good for our perception of the world. Plus, sometimes a middle aged woman whose kids are off on their own just likes to hang with a llama. I should know. – L 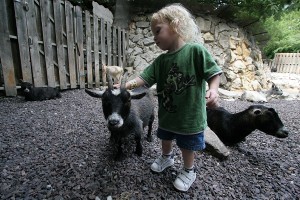 Stay away from my kid! (Says the goat.)

Charges Against Mom Who Let 7 y.o. Walk to Park are DROPPED!
Is the Common Core Crazy?

108 Responses to When Playgrounds and Amusements Ban Adults without Kids