Hi Readers! You know how you can go to one site to look something up and a few clicks later you end up someplace else completely different? (I was trying to find the percentage of parents who worry their kids will be kidnapped — a London study found 98%, but I couldn’t find a figure for the States. Can you?) That’s what just happened. One thing leads to another thing which leads you — or, now, us — to dsbfibirtr
this very intriguing Dept. of Justice memo from a few years back about how important it is to combat not just crime but also the FEAR of crime.

As Free-Rangers, you’re probably quite aware that the fear of crime is out of whack compared with the safe times we’re living in. But what I hadn’t realized before is that this crime perception gap bothers the cops as much as it bothers us! The Dept. of Justice goes so far as to quote  Wesley Skogan of Northwestern University,who has studied and evaluated police strategies since 1993: “He makes the case for paying attention to fear of crime as follows,” says the department, which then excerpts a 2006 Skogan piece:

Fear of crime is a social and political fact with concrete consequences for big-city life. The costs of fear are both individual and collective. Fear can confine people to their homes, and it undermines their trust in their neighbors and, especially, in their neighbors’ children. Fear is a key “quality of life” issue for many people. Research also indicates that concern about crime has bad consequences for the neighborhoods in which we live. Fear leads to withdrawal from public life, and it undermines informal and organized efforts by the community to control crime and delinquency. It is difficult to organize activities in neighborhoods where people fear their own neighbors. Fear undermines the value of residential property and thus the willingness of owners to maintain it properly. When customers – and even employees – fear entering a commercial area, the viability of businesses located there is threatened.

Of course on this site we discuss how fear changes childhood: Kids are kept indoors “for safety,” even in very safe neighborhoods. Pretty soon the parks are empty and this creates a vicious circle: Kids don’t go there because kids don’t go there. Instead, they are at home, often sedentary, or they’re at organized activities which can be wonderful — but they aren’t the same thing as playing. Kids playing informally, unsupervised have to figure out something to do ON THEIR OWN, and then make up the rules and then enforce the rules and then compromise, communicate, problem-solve and do all the other developmentally enriching things kids have always done…until now. When the fear of crime triumphed.

Any ideas on how to tamp down the fear and amp up the desire to go outside and connect are most welcome. – L. 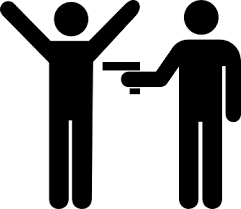 Keep your hands — and your unreasonable level of fear — up.

Is Your School More SAFE, Post-Newtown, or Just More Annoying?
Your Baby Can Get Ahead! (For $29.99)

39 Responses to Why Fear of Crime Matters