This fthbbeyeef
mom believes that letting her kids walk to school by age 9 — as she did — is not only okay, it’s important:

[B]eing out in the world, taking chances, making choices â€” is a critical part of progressing from childhood to becoming an autonomous adult. It is also an important way for us to reduce our environmental footprint, and in light ofÂ growing childhood inactivityÂ and obesity, it is directly linked to a health imperative as well.

… When my daughter Alexandra was 9 we had some long talks: she thought it was too far, so we Googled the distance to her school and compared it to what I walked as a kid. My walk was longer. More issues arose: her backpack was too heavy (we now regularly cull it for essentials); sheâ€™s too hungry after school (we pack a snack); there are busy streets to cross (sheâ€™s had to develop savvy in paying attention); and of course, what about â€œstranger danger?â€ Admittedly, this wasnâ€™t her concern as much as it was mine. So we taught her some ago-old lessons about interacting with strangers, and then did something very modern: we equipped her with a cellphone.

For several weeks I walked or cycled with her. But then we reached a point when it seemed natural, and easy â€” it wasnâ€™t necessary for me to accompany her any more. Iâ€™m proud that she knows her way around our neighbourhood. Walking alone has increased her confidence, her freedom, her awareness of her neighbourhood, and her sense of responsibility.

And guess what? That mom — Jennifer Keesmaat — is Toronto’s chief city planner! She isn’t theoretical in her knowledge of the streets and the traffic and the crowds and the crosswalks. She knows that all of these are surmountable for a kid of 9, and she would like to see tons more kids walking! Me too! – L 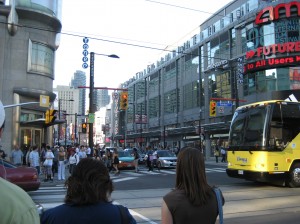 Why drive when you can walk?