Sydney riehtayffa
Gurewitz Clemens is an author and educator. Her business card says “Helping Adults Help Children.” Her latest book and other writings are here. I love what she says about kids and strangers.

Dear Free-Range Kids:Â I want to tell you about how I taught my son and my daughter to talk to strangers:

When they were in 1st grade and kindergarten, I found a wonderful program across town, with creative teachers and a strong, smart philosophy.Â  Their school began at the same time as the one where I taught, and was the opposite direction from our home.Â  This was in the 1970s, and there werenâ€™t any laws then against children going around town by themselves. Who could imagine such a thing?Â  I still canâ€™t!

The bus stop where they left for school was in our pleasant community and the one where they got off was just 2 blocks from the school.Â  However, I was concerned because there was a very busy street to cross on the way from the bus to the school.

So we practiced going to school.Â  I took them on the bus to school several times.Â  The first time I was in charge, and showed them how to find their stop, when to ring the driverâ€™s bell, and where and how to get off.Â  I told them that while they were on the bus, the driver was the grownup to talk with if they needed help.Â  After that first time I was passive and they were in charge of taking me to school. The children were alert and didnâ€™t miss any cues.

Each time we got to the bad intersection we practiced finding someone — a stranger — to help them cross the street.Â  We did this about a dozen times.Â  I told them, â€œBefore you ask someone to take you across the street you must agree on the person. No arguing, just find someone you both think will be good, and say, â€œMister, (or Maâ€™am) would you please take us across the street?â€

First I went across, to watch them make their decisions.Â  And they didnâ€™t choose by race, they didnâ€™t choose by gender, or age, or body type. They chose by . . . vibe.Â  As I watched them I thought, “Young dogs go about by themselves, and so do young turtles, And my kids could make even better decisions.” Â There never was a bit of trouble with their going to school in the three years they went there all on their own. Thatâ€™s the story.

Here are my qualifications for it: I am, by profession, an early childhood educator.Â  I taught young children for some 14 years, and their teachers and parents (at Pacific Oaks College, San Francisco State, Fresno State, and Sonoma State, as well as keynoting conferences and seminars in more than 30 states and in Europe and Asia).Â  I get to tell grownups whatâ€™s best for children.Â  And I want to state, unequivocally, that being under an adultâ€™s eyes all day every day for 15 years is NOT good for children.

I first told this story when, during the question and answer period after a keynote speech I delivered, I was asked a question which assumed that I taught my children NOT to talk to strangers.Â  I replied:

When Iâ€™m in trouble, out in the world, I ask a stranger for help.Â  Not every stranger, but one who seems to me to be a good person.Â  This hasnâ€™t ever backfired on me, and so I feel that itâ€™s a good Â practice.Â  I want my children to have the same confidence in their ability to make requests of other people and that doing so is sensible.Â  So I taught them TO ask, and Iâ€™m glad I did.

Short and simple: Teach and trust.Â And as I always say (even on Nancy Grace): You can TALK to anyone, you just can’t go OFF with anyone. – L. 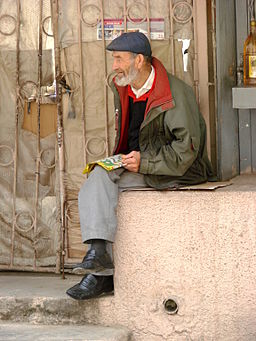 Can you please help me cross the street?

Would You Issue a Recall of this Sweatshirt?
A “THANK YOU!” FROM the Florida Mom Arrested for Letting 7 y.o. Walk to the Park