This sneyydtfrn
letter I got yesterday reminds me of one of the most thorough, fascinating, damning study I’ve ever read about where the “No touch” policy comes from (and why it is unnecessary, and how it actually makes us all MORE afraid for our kids):

So those sex crazed pedophiles have invaded the Girl Scouts now apparently. My daughter went to horse camp this summer and even though the girls are as young as 5 and out in the heat and sun of Tucson the female leaders are unable to help the girls put sunscreen on or help them with their riding helmets because that would require them to…. Gasp… TOUCH THEM! That’s right they are not allowed to even touch their face or the back of their necks or any other hard to reach place. Instead they stand in front of the girl and put the sunscreen on theirselves while the girl watches so she can mimic their movements and see where they are missing. Girl by girl. Talk about a waste of time and a great way to get lots of little girls with sunburns on the back of their necks or tips of their ears. You can’t even sign a release giving permission for them to touch them. That is so crazy!

“Crazy” is literally true. Â This remarkable paper by New Zealand professorÂ Alison JonesÂ explains that theÂ fear of counselors or teachers touching kids grew out of the Satanic Panic of the 1980s. When a well-regarded study seemed to “prove” that 5.5 out of 10,000 children would be sexually molested in early childhood ed, drastic precautions were deemed necessary. But, Jones writes, “Not only was [the researchers’] Â methodology very doubtful (by their own admission) but they also included as their flagship teacher sexual abuse example the infamous McMartin day care ritual abuse case in California, which was still in court at the time of the publication of their research.” While the researchers “were happy to assume in their research report that the McMartin daycare staff were guilty of abusing ‘hundreds’ of children, all staff involved in the case were in fact later acquitted.”

Too late! The idea had already taken hold that students were being “groomed” for pedophilia left and right. The upshot? Jones interviewed teachers in her native New Zealand:

“I’ll touch a child only when I really have to – on the arm or back maybe. Or in an emergency. And even then maybe not, if there is a female staff member there she will always do it. Never the trunk area. Not the head, that is culturally insensitive… Nowhere, really! (laugh) It could easily be misconstrued….” (first year male teacher)

“Yesterday we had an interschool game and a boy did so well I wanted to congratulate him and I went up and instead of awhi-ing him [gesture of arm around the child’s shoulders], I was standoffish.” (male principal)

“When a child is really inconsolable, sobbing, from name-calling or something, and they just need an arm around them, you just can’t…You are just aware that it is not part of the protocol, so you get other kids to make them feel better, or you try to distract them somehow.” (experienced female teacher)

“I used to cuddle the kids. I wouldn’t now. If a child is upset I’ll get some other children to comfort them. “(experienced female teacher)

“Hands in pockets. They grab hold of your hands, so fold your arms….” (male first year teacher)

Jones writes that in a culture completely obsessed with risk avoidance, this new practice may seem like “common sense,” but it’s not. Common sense is what the teachers did BEFORE these new rules. The rules are hysteria made physical. And ironically — tragically — rather than reassuring parents, they are “reinforcing the idea that teachers are potential abusers who must be watched at all times.”

Including when they help a kid put on sunscreen, in public. – L. 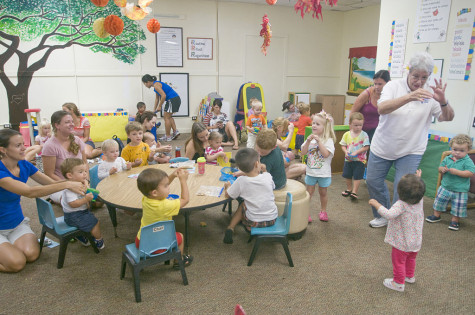 Watch out for that potential predator, kids!