September 11, 2014
From dtrhahritf
G.K. Chesterton, a journalist who gets it. For “man falling off scaffolding” substitute any tragic story of a child in the news.

“It is the one great weakness of journalism as a picture of our modern existence, that it must be a picture made up entirely of exceptions.
.
We announce on flaring posters that a man has fallen off a scaffolding. We do not announce on flaring posters that a man has not fallen off a scaffolding. Yet this latter fact is fundamentally more exciting, as indicating that that moving tower of terror and mystery, a man, is still abroad upon the earth. That the man has not fallen off aÂ scaffolding is really more sensational; and it is also some thousand times more common.
.
But journalism cannot reasonably be expected thus to insist upon the permanent miracles. Busy editors cannot be expected to put on their posters, “Mr. Wilkinson Still Safe,” or “Mr. Jones, of Worthing, Not Dead Yet.” They cannot announce the happiness of mankind at all.
.
They cannot describe all the forks that are not stolen, or all the marriages that are not judiciously dissolved. Hence the complex picture they give of life is of necessity fallacious; they can only represent what is unusual. However democratic they may be, they are only concerned with the minority.” —Â GK Chesterton

As you can probably guess from his language and examples — and photo — Â GK is no longer with us. In fact, thisÂ poet, theologian and “man of towering genius” (so George Bernard Shaw called him) died in 1936, but his words are no less true today. The news reports the exceptions. We see them so often — the kidnappings, the rapes, the kids who die in hot cars — we think they are common when they are anything but. — L 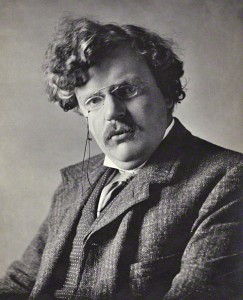 GK speaks to us today.

“Some Kids Freeze in Dangerous Situations!” Your Response to this Fear?
Grandparents Gone Wild (With Worry)