Dear Readers — When you live in a society spasming with fear, it is hard not to flinch. That’s why we are here on this blog together. To support each other when the world mistakes our confidence and rationality for neglect and abuse. – L.

Dear Free-Range Kids: I just finished reading Free Range Kids, over the course of 1.5 days. I never send fan mail, but I couldn’t keep my gratitude and relief to myself.

I am the mother of a 22-month-old boy, and I have been parenting him in a Free-Range style without really having a name for it.Â  He has always been very independent, so I’ve always given him as much freedom as I feel a toddler can have. Â Parents who follow their children around the (fenced-in) playground have always confused me, and I’ve gotten my fair share of concerned looks when he has climbed on top of something really high (again) and I haven’t been rightbyhisside.

Though I knew my parenting style was more hands-off than most of my counterparts, I always felt confident in my choice to trust my son and let him set his own limits (within reason of course – I have yet to let him sit down to play with cigarette butts in a busy parking lot).Â  But about a month ago, something happened that really made me wonder if I was a terrible parent and wrong to think “stranger-danger” was overblown:

After an afternoon of running errands, my son and I made a last stop at the post office. I needed a flat-rate shipping box.Â  He was getting sleepy, so I decided that he could stay in the car while I made the 20-second trek to go inside, grab a box, and come right back out.Â  It was a mild October afternoon and I was able to snag a parking spot that would allow me to keep the car in my line of vision.Â  I handed him a book, told him I would be right back, locked the doors, and was back within literally 20 seconds. Â We were about to be on our way when:

Oh jeez.Â  An elderly lady parked in the car next to us was hanging out of her window staring at me. I rolled down the window and hesitantly replied, “Yes?”

“YOU DON’T DESERVE TO HAVE CHILDREN! YOU DON’T DESERVE TO HAVE CHILDREN!”Â  Her screaming drew a crowd and I was absolutely mortified. Even thinking about it makes my hands shake and my face flush.Â  My first instinct was to f-bomb her, but my son was with me and she was well, old, and you can’t f-bomb an old person, even if they are telling you that you should be sterilized.

I decided to roll up my window and just drive away. Then I became worried that she had probably written down my license plate and was on the phone with the police.Â  I began to wonder if I have actually been making choices that were endangering my son.Â  My stomach was knotted for days and I couldn’t sleep.Â  My husband was assuring me that she was crazy, or maybe she knew a child who steamed to death in a car.Â  Either way, my confidence was gone.Â  Never had my parenting skills been so publicly condemned, and never had I felt so much FEAR about parenting.

Then I read your book and found this blog. Ahhh (that is a sigh of relief). Â I stopped feeling so alone and fearful.

Parenting is hard enough without living in fear. Thank you a million times. 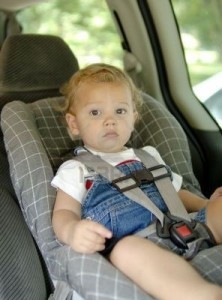 It is hard to stay sane in a society that sees a boy like this as hideously endangered.

“A Transgendered Student in the Bathroom is So Confusing, It Opens the Door for Predators”
Nancy Nord on Common Sense and Imaginary Dangers

74 Responses to “You Don’t Deserve to Have Kids!” — A Parking Lot Encounter