Down in Brisbane, Australia, they apparently have changing rooms where parents — not just moms — can change their kids’ diapers.

But one mom saw a dad in the room and screamed bloody murder. Reports dtfkdfnazf
the Brisbane Times:

An embarrassed father left a shopping centre parents’ room with his naked son in his arms after a woman declared the room was “only for mothers” and told him to “get out you sicko”, according to a second mother who witnessed the exchange.

Tamika Ives said she came to the man’s defence, bringing him back to the change room where he had left his belongings and told the abusive woman that she would “100% back the dad up” after the attacker threatened to call security.

As thrilled as I am that this young mom, Tamika, stood up for a fellow human who happens to be (yipes stripes!) MALE, the rest of the story is depressing:

The 18-year-old posted about the incident on Facebook and was shocked by the number of people who had seen fathers face similar situations.

Ms Ives said she shared details of the incident on the Sunny Coast Community Board Facebook group after witnessing other women staring at fathers in parents’ rooms and mumbling rude comments under their breath.

The initial confrontation happened at Kawana Shoppingworld about a month ago when Ms Ives took her nine-month-old daughter Savannah into the parents’ room.

And here’s the worst part. The crazy, screaming mom  “also threatened to call security and allege the man was staring at her children if he didn’t leave the room.”

That’s right, she was going to accuse him of being a pervert, just because she could. Talk about carrying a deadly weapon! That’s what a false accusation is, a weapon that could be used to shatter a man’s life.

Of course, she didn’t end up doing that, so we don’t know if she really intended to pull the trigger. Let’s hope she was bluffing. But let’s also hope that by Tamika bringing this rank prejudice to public attention, people will realize that it is not perverse for parents to be in the parents room, even if they  happen to be dads. – L 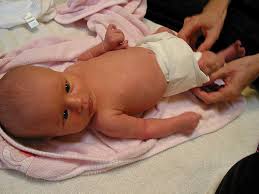 How dare a dad pretend to be a competent, caring parent, the pervert!

THIS Mom Got Her Dream: Kids Playing Outside without Her Having to Hover!
Why Are Millennials So Afraid of Freedom? I Think We Know

55 Responses to “You Sicko!” Screams Lady at Dad Changing his Son’s Diaper in Public Changing Room