I have four kids, ages 9, 6, 4, 2. I generally allow and encourage (and sometimes require) my older two to ride their bikes. My philosophy is that if it is safe and reasonable for them to propel themselves somewhere, than they should. I have little kids at home who don’t want to spend their summer days in a minivan while I chauffeur the older two around. A neighbor, whose daughter is 10, asked me if I let my kids ride their bikes alone to the park, which is one and a half miles away with one busy County Highway to cross. I told him that yes, they’re allowed to ride there together. They know the safety rules of biking and of crossing busy roads. The neighbor said he’d been hesitant to let his daughter do this, but if she went with my kids, he’d feel better about it. So, they all went together and had a blast! He lets his daughter regularly bike to the park now.

My oldest daughter’s friend lives about a half mile away, across the same busy County Highway. The friend called one day and asked if my daughter could come over. I sent Charlie on her bike, and when she arrived, the other mother called me to see if I knew my girl had ridden alone there. I told her of course I knew! We talked about it and she agreed that even though it made her nervous, IT MADE SENSE to allow the girls to ride alone at this age. They are now BOTH coming to and from each others’ houses solo!

We are very good friends with a family whose oldest two kids are best friends with our oldest two kids. We were all talking one night about letting them do more stuff alone. Our friends said that they had been on the fence about letting their kids bike/walk to our house, the park, the school, etc. We shared our feelings about how it’s good and healthy for them to do things on their own. They agreed and now ALL the kids are riding their bikes around in a big pack, exploring, and having a blast. They’ve managed to stay safe, stay out of trouble, and have a ton of fun all summer long!!

I’m realizing that there are a lot of parents out there that WANT to give their kids more freedom. They just need a little push from someone letting them know it’s okay. The “safety” movement has created sort of a mob mentality with parents, but a lot of people don’t necessarily want to subscribe to it. They just think making a lot of rules and restrictions is what good parents do. I’m grateful that Free-Range-Kids has inspired me to break free of this delusion, and that I in turn have inspired these other parents to give their kids some much needed freedom. Perhaps these parents will inspire more. Perhaps by next summer our playgrounds and streets will be filled with kids having a safe, and happy-go-lucky summer with their friends. Could this be possible? Here’s to hoping!! – Laura Alves 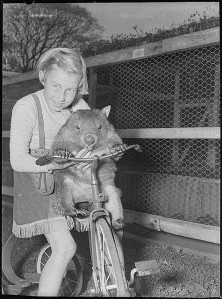 No, there is actually no mention of wombats in this post. But kids on bikes, yes.

A Newspaper Delivery Boy Song to Brighten Your Day (Unless You Over-Analyze it The Way I’m About To Do)
Play or Decay, Kids!

52 Responses to You Think Your 9 & 6 Year Olds are Too Young to Ride Their Bikes to Their Friends?