This wonderful, yshrsdtnik
rousing piece by Rachel Lu at The Federalist had ME trembling. (Not shivering! Trembling.) It’s titled, “Stop Siccing the Police on Me If My Kids Don’t Wear Coats For 20 Seconds,” and begins:

The envelope trembled in my hands as I slowly broke the seal. This was it. Even when you know it’s coming, you never feel fully prepared. Slowly, I unfolded the page.

“Dear Parent,” it read. “Winter weather has arrived, and it’s time for a reminder about appropriate winter attire.” Emotion welled up inside me, and I could read no further.

Emotion wells inside me with those words, too, because who does not know that winter has arrived??? Do the schoolmarms really think that THEY notice the change of season, but parents just put on their flip flops, head outside and wonder why their toes are turning purple? How come it’s so NORMAL to treat parents as idiots?

Well, that’s sort of Lu’s point, too. But for her it’s less theoretical.  She has four young boys and it can be hard to convince them to bundle up:

If we’re going to a parade or an outdoor light show, I will insist. But what if their outdoor exposure will be limited to a few 45-second windows as we hurry from the car to a warm building, and then back again? Still necessary to risk the tantrum? I think that’s a parental-discretion sort of question.

Of course it is. But onlookers feel compelled to weigh in, and this is what happens:

About a year ago, I brought my family to an outdoor football game on a 30-degree day. On this occasion, the older three boys were dressed in all the winter accouterments, since we were planning to be outside.

But I knew the baby would be dropping things all over the place, so I devised an ingenious solution: I layered him in multiple full-body suits, with two too-large sets of footie pajamas on top (covering his hands and feet). Then I strapped him to my body (another source of warmth!) and kept his head warm by cupping my own gloved hands over his cranium while we watched the game.

The plan worked splendidly from the standpoint of protecting the baby from cold (as judging by his warm extremities, healthy pink color, lack of shivering, and evident contentedness). There was just one drawback. The police asked us to leave because “patrons were complaining” that my baby looked cold.

Since when do onlookers get to force a mom to parent the way THEY think she should? Since when do police enforce something like this?

Answers: 1) Since parenting became a spectator sport. And 2) Since the entire country became convinced that kids drop dead the second they are not in a 5-point harness in a late-model high chair in a climate-controlled living room with one parent teaching them phonics while the other prepares a snack of farmer’s market fruit. And bonus answer 3) Since some police now believe their job is to enforce parenting  norms, not just laws.

So good luck to all you parents out there. And remember: It’s winter. Do not leave the shower and walk straight outside without a towel. – L. 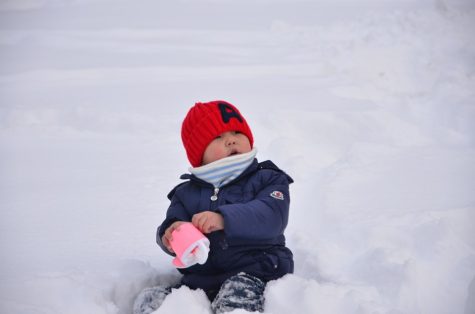 Put down the camera and save that ice-encased child!

Worst Public Service Announcement Ever?
I’d Wondered Why The Kindergarteners Couldn’t Play on the Playground Till October