June 29, 2012
Hey khafhfrsfs
Readers — Here’s a really wacky story from Iowa. An elementary school principal, Terry Eisenbarth, was investigated for “whapping”  kids as part of their birthday celebrations at school — that is, hitting the kids lightly with a super-padded paddle.
Sounds like one of those things that just becomes a goofy tradition, but in our abuse-crazed culture, I’m sure you can guess what happened next: Even though only the kids who WANTED a whapping got one, two families objected to the practice as if the principal was practicing bondage and discipline (in plain sight of the other kids, and teachers, and possibly a pinata).  An investigation began, the principal resigned, and a year later,  here’s what the judge decided:

In a ruling dated June 14, administrative law Judge Robert Wheeler dismissed the charges of physical abuse against a student, failure to protect students’ health and safety and exposing students to unnecessary embarrassment or disparagement.

Whether those “whaps” were harmless fun or psychologically damaging formed the bulk of the complaint, with several parents alleging the birthday ritual was an attempt by Eisenbarth to “establish his dominance and cause the children to act submissively.”

But more parents came out to support the former principal, testifying that the experience was harmless and optional, enjoyed by those who opted in and witnessed by other students and staff.

Principals Steve Brand of Mount Vernon High and Noreen Colbeck-Bush of Mount Vernon Middle School testified on Eisenbarth’s behalf, saying their own children had participated in the birthday ritual and neither of them considered the practice abusive.

Colbeck-Bush said parents who objected did so because the birthday “whaps” appeared to resemble disciplinary “spankings,” but that she easily distinguished between the two behaviors. Brand said he’d observed Eisenbarth at work as part of professional rounds of Washington Elementary and found him to be a good administrator.

… After conducting a criminal investigation, Sergeant Harvey Hall of the Linn County Sheriff’s Office determined no children were traumatized by the “whappings,” and no crime had taken place.

Hey, I’ll bet SOMEONE was traumatized — the principal! To have his public, offbeat ritual called a psychologically damaging form of child abuse is like  calling a high five “hand-to-hand combat,” or a backslap a “beating.” But during a year of investigation, that’s the soul-crushing cloud he was under. Kudos to a sergeant and judge who were able to distinguish between silliness and sadism.  You’d think that would be pretty easy, but in a culture beloved of Worst-First thinking (a man, a kid, a pat — SEX ABUSE!), it takes guts to stand up for what’s right.  Whap on! — L. 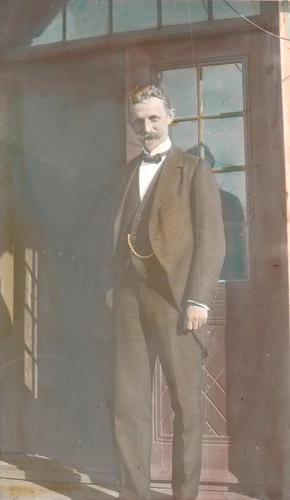 (Only picture of a principal I could find.)

A Lemonade Stand that Did NOT Cost $280? Imagine that!
These Moms Created a Neighborhood Camp (And So Can You!)

48 Responses to 50 Shades of Grey or Goofy Grammar School Principal?