Hi Readers — Remember the Military-Industrial Complex? You should, because it’s still around. But now it’s time to consider a new one: the Hysteria-Bureaucracy Complex, whereby any and every potential danger triggers hysteria and bureaucratic intervention, especially when that “danger” has to do with children. To illustrate this, allow me to introduce an article from the Courier Mail in Australia. (Australia SEEMS like it would be the land of cocky kids wrestling crocodiles in the classroom. It’s not.)

The erbfhftzrr
article says that schools down under are now required to conduct a safety assessment of all potentially dangerous activities. But as there are so few truly dangerous activities at school (unless you’re at Hogwarts), the bureaucrats seem to have cast around for incredibly safe activities they could pretend to consider dangerous and Bingo! (Or perhaps Dingo!): They found 134. These activities include tag (called “tiggy” in Oz), and ice skating and…art.

“Teachers are told the use of toxic material in painting and drawing activities, including glues, pigments and solvents, require them to document controls or complete a curriculum activity risk assessment…

Parental permission for ART CLASS? Maybe teachers should obtain permission for letting kids use dangerously sharp implements, too — like pencils! Piercing projectiles that just happen to aid in writing: Why do they get a free pass?

And how about the risk posed by notebook paper? Do no one realize how easily a paper cut can get infected and how easily an infection can lead to amputation? And let’s not even talk about those pink erasers. How do you erase CHOKING HAZARD?  You can’t!

It’s not like a totally safe classroom is so hard to create. Kids could just come in, sit on the floor (so they don’t fall off their chairs), listen to their teacher (who should probably wear a mask, so she doesn’t spread germs) and record their lessons on a slab of wet organic clay (thus avoiding toxic inks and such).

When it’s time for gym they can roll around on the ground for exercise, so no one trips. As for recess, they can slither outside (a belly to the ground prevents running, which prevents falling) and take turns on the jungle gym: one at a time, with an adult holding them by the middle. (And another adult making sure the first adult isn’t molesting them. And a third adult making sure the first two aren’t in cohoots.)

Of course, if it’s raining the students should stay inside. Duh!  And if it’s sunny, you’d want them to avoid the threat of skin cancer. And if it’s cold, there’s hypothermia. Heat: Hyperthermia. But they can always go out if it’s 66-75 degrees and overcast, so what’s the big deal?

After school they can even stay for enrichment classes, like music. They just can’t play the violin. (Who needs a bow in the eye?) And of course piano’s a no-go: They could get locked inside, if it’s a grand. And uprights tip over.

For more active kids, there’s statue soccer: It’s just like regular soccer, except instead of running, you don’t.

By the time kids get to high school they should be soft, sweet blobs of absolute safety, the human equivalent of marshmallows. Which reminds me: If your kid wants to toast one of those, the Canadian Girl Guides consider this a somewhat risky activity and ask troop leaders to submit an activity plan, including the list of participants and supervisors with the appropriate child-adult ratio, as well as an emergency response plan, two weeks in advance.

And I wish that was part of my snarky, made-up list of precautions, but it’s not. Those are the real rules, according to a Facebook comment on made about the S’More Safety post a few days ago.

Welcome to the Hysteria-Bureaucracy complex! – L 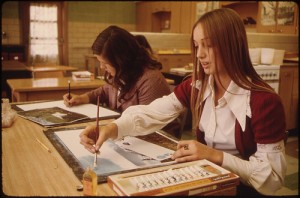 Free-Rangers: Your Children Should be Taken From You! (Signed) A Fed-Up Librarian
“Do Not Give Into Fear” says Police Chief…After a Child Abduction!

56 Responses to Art Class is Considered a “Medium Danger” in School. (Gee, Not HIGH RISK?)