Fox 26 Reporter Andrea astirzynhn
Watkins wrote what I consider a masterful letter to the school district that has forbidden parents from coming onto school property to pick up their children and walk them home. (It does seem to allow them to wait until all the car and bus children have left — a lengthy process — and then take their kids by foot.)

Here’s the update and her letter,Â from the Fox 26 Faceook page:

My followup story about Magnolia ISD had to air in our 5pm newscast without any comment from the school district. I got no response about the complaints of the parents last night. Last night, I let them know I would be looking for a response today. After hearing nothing this morning, I compiled an e-mail with specific questions. That was send to Magnolia ISD Communications Director Denise Meyers at Noon today. I called two more times through the afternoon, asking if I was going to get a response. By about 4pm, Meyers returned my call saying they were working on a response with the district’s legal team and it was only partially ready.

It’s fair to say that school districts have better things to do than respond to the media, especially on the media’s deadline. I respect the district’s effort to assemble their response in the way they see fit, taking the time necessary to do so.

That said, I want to make it clear as a bell that I am trying to get a response from the district on these important matters. It’s frustrating to me to be accused of not getting their side of the story, when all along I have been providing the information that they have given me.

Just so everyone sees what I asked for today, below is a copy of my request. I will post the district’s entire response, word for word, as soon as I get it.

My letter to Denise Meyers:

Very nice to meet you last night. Thank you for being so welcoming and accommodating to us. I genuinely appreciated it!

Today I’m just reaching out for comment about the statements made by parents at the school board meeting. I recognize it may have been too early for the district to immediately respond to what was said last night. But today I’m asking for an interview or a statement about the following:

Specifically, on the comments made by Heather Burke and Lindsey Simmons, will Bear Branch be revising it’s policy to work with the parents who want to walk their children? What does the district say to the claims that the district is violating the state and federal laws? Will the district apologize to the mothers for sending law enforcement to the mothers’ homes to threaten them with trespassing?

Additionally, during Ginger Russell’s statement, she said the superintendent grossly understated the number of student withdrawals from Bear Branch this year in his letter to parents. She says she has information from a Public Records Request saying the number was 67, not 12. What’s the truth?

In that same letter there is reference to a parent whom the district claims was disruptive and physically threatening to individuals at the school. This is the parent who later in the day received a no trespass warning. Does the school district have a police report to back up their claim? If so, I would like more information about it. If not, why not? One would expect if someone had created a scene like that, law enforcement would have been called into the situation as it was happening. I’m asking because that parent tells me the district’s statements are completely false.

Finally on this topic, many people are asking me what the district’s explanation is for this school needing to have this type of policy. Instead of simply pointing to “safety reasons” will you please provide some specifics about what the problem was, how people were endangered, and how the new policy is an attempt to address it?

In an effort to fully represent the school and the school district’s position on this, I will be posting my questions and your entire, unedited, response, online.

And here’s Andrea’s TV report. Go, go, go Andrea! And moms! And us! One of the moms who was visited by law enforcement for walking her child home quotes the Federal “Every Student Succeeds” Free-Range Kids amendment that states parents have the right (barring local laws to the contrary) to choose how their kids get to and from school — even by foot. And thanks again to Sen. Mike Lee for sponsoring that! – L 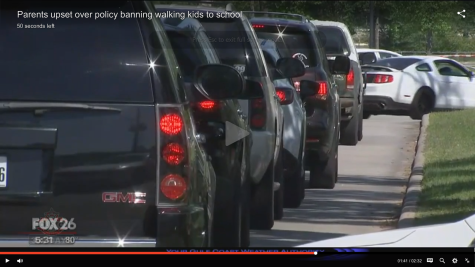 Why let kids walk, when they can commute in style?

Mom Leaves Son, 12, In Car Half an Hour. She’s Arrested, Jailed, Can Only See Him When Supervised
Dear Prudence: I’m Scared That My 4-year-old Is 20 Ft Away from the Adult With Her!

42 Responses to Follow-Up to the “No Children Can Walk Home” Story from Magnolia, TX