Hi aznshibtnr
Folks! Here’s a post from a fellow writer who’s also a friend: Denise Schipani. She’s got a new book out, too! (See below.) —  L.

My son’s 9-year-old friend, Luke, mows the lawn at his house.

A generation ago, legions of 9-year-olds would be out in back and front yards in every suburb in America, revving mowers and cutting the grass – and no one would think a thing of it. In fact, they might think it odd if, say, they saw a landscaping company mowing, while the 9-year-old was being chauffeured to a supervised activity at an indoor sports arena instead.

These days, at least where I live, Luke looks odd out there on the lawn. I bet it also looks odd when he and his little brother are waist-deep in the engine of their mom’s car, as their dad, our friend Dan, shows them how to change spark plugs or whatever it is one does with engines. Dan told me recently that he’s gotten alarmed comments from neighbors when they see Luke with the mower or his younger brother toting tools from the garage to help. Taken aback, they’ve said, “How can you let a child mow the lawn? That’s so dangerous!”

To which Dan – a major DIYer – scoffs, “No it’s not! I’ve taught him how to use the mower,” before getting back to some light work like replacing garage doors or building a retaining wall.

He’s right. Sure, mowing a lawn can be dangerous, but so can skateboarding and so can taking a bath. It’s about perspective, which many parents of my generation have lost a firm grip on – we seem to go into parenting presuming our children’s ongoing fragility, rather than assuming, as Dan has with his kids, their strength and competence. He impressed on his son the proper respect for machinery, but otherwise left him alone.

Free-Range yard work, perhaps? I think it’s a great idea, and after that conversation with Dan I sent my own 9- and 7-year-olds into the yard with a rake and some yard-waste bags. Why shouldn’t my own sons feel the same pride as Luke does in a job well done?

Denise Schipani is the mother of two boys, and the author of Mean Moms Rule: Why Doing the Hard Stuff Now Creates Good Kids Later (Sourcebooks). She blogs at Mean Moms Rule. 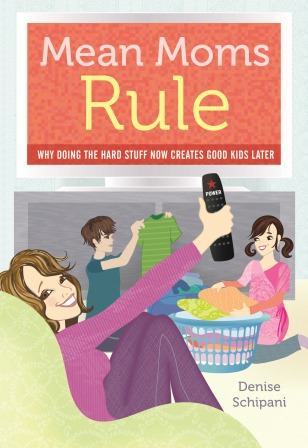