This post comes from Mollie Shaw, a friend, frequent commenter, and Free-Ranger who is a writer and marketing consultant in British Columbia. Maybe it will resonate for you the way it did for me:

Dear idhenrhyeh
Free-Range Kids: I can remember feeling lonely as a young child in the 1970s.

I have vivid recollections of being inside my house, on a weekend, or a long summer day, “nothing” on TV (the three major networks and fuzzy reception of PBS). If I had called all of my friends (I don’t think my mother ever made a call to another parent trying to “arrange” for me to play somewhere or have a friend over) and couldn’t find a connection, then I was at a loss. What to do?
.
Go outside.
.
Sure, there were times when we kids wanted to be inside watching TV, when there was something “good” on, and Mom would shoo us out the door to get some “fresh air.” When video games came into fashion in the 1980s, there was a definite shift toward indoor time with friends.
.
Still, if you were alone, it was lonelier to be inside than outside.
.
So I’d go outside. At least if I went outside, there was a chance I might run into another kid. That wasn’t going to happen inside my house. Those random social encounters only happened outdoors, and sometimes I would even encamp myself on a neighbour’s driveway, waiting for their car to return, so I’d be the first face they’d see.
.
But here and now, in the 2010s, outside is the lonely place to be. The chance of a spontaneous social encounter with another young child is basically zero these days. No, there aren’t other kids in the street, outside in their yards, playing at the park. There’s no point in going outside if you’re alone, and connection is what you’re after.
.
Nope, for that, you’re better off with Snapchat or Instagram. Indoors. Where the wifi is strong, and the walls can protect you from the randomness and hugeness and loneliness of the outside world. With a small device in your hands, you’re much more likely to connect with your buddies. They’re all at home alone too, hovering online, and that’s where you’re more likely to find them, since they’re not out shooting hoops by themselves, hoping that the rhythmic bang bang bang of the ball on the pavement will draw others outside to play with them.
.
Our kids have been trained well. They won’t go outside without us, because it’s too lonely. Maybe we’ve told them it’s dangerous, too. Dangerous and lonely. Would you go outside, if that’s how it felt to you? An empty, scary nothingness with zero social connection possibilities?
.
We wonder how to get our kids to “like” going outside. No one had to convince me, when I was a child. If I knocked on doors and made phone calls and no one was available to play, I knew that I’d better hang around outside, where they could find me.
.
As I waited, I would inevitably start studying bugs in the grass, or looking at the odd shapes of the clouds, or making a tiny pot out of mud. The meditative qualities of encountering the tamed-down “wild” of suburban Ohio were no doubt a good thing for me. A thing that hardly any child, anywhere in middle-class North America, experiences anymore.
.
Because inside is comfortable, safe, and social. Outdoors is lonely, dangerous, and boring.
.
What a quick and complete change in childhood. – M.S.

It sure is. So let me put in a plug for two things. First, this coming Saturday is our annual TAKE OUR CHILDREN TO THE PARK…AND LEAVE THEM THERE DAY — the day parents are encouraged to take their kids to the local park at 10 a.m., in the hopes that other families will do the same. Then, if the parents think their kids are old enough (7? 8?), they leave them there to figure out how to have fun with other kids, without an adult directing them.
.
Second: As summer approaches why not try out freerangefriend.com? It’s a free service that helps you find other people nearby who ALSO want to send their kids outside.
.
And feel free to suggest any other great ideas for making a neighborhood a neighborhood! – L. 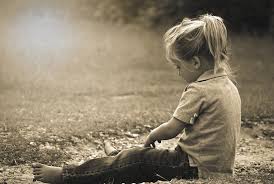 What is this strange creature doing outside?

Julie Gunlock: “Let Parents Decide If They Want their Kids to Wait in the Car”
Take Our Children To the Park…and Leave Them There Day: THIS SATURDAY, MAY 21!

23 Responses to It Used to be Lonely for Kids INSIDE. Now It’s the Reverse