Readers zreriaayka
— This is such a fantastic example of the way our society is going: Better not to experience ANYTHING than to be exposed to a single ounce of RISK. It comes to us from Julie Saxon, a university lecturer turned stay-at-mom of two in San Jose, CA. –  L.

Dear Free-Range Kids: Just wanted to share this story that happened yesterday. My family has decided it’s time to adopt a pet, and we’d like a cat or kitten.  My husband and I both grew up with cats in the household and we both had indoor/outdoor cats. I know there’s a lot of controversy about what’s best, but we both believe that it is better for the cat’s well-being to allowed outside sometimes.  (Plus no litter box is awesome!)

So we set out to a local pet store yesterday that was holding an adoption fair. It was being put on by a local cat rescue that had very specific requirements of the homes in which the cats are to be placed, and one — written into a contract — is that the kitten will be kept indoors only. So, obviously, this wasn’t the rescue for us. But what was really interesting was the rhetoric the volunteer used in trying to convince us that cats are better as indoor only. It mirrored almost exactly what the media is telling us about children!  Some of the things she told me:

* We all used to have outdoor cats when we were kids. Everyone did. But things are different now.
* The cats’ biggest problem is PREDATORS. We think it’s cars, but it’s not. It’s predators. She then began to speak about COYOTES, despite the fact that I live in the suburbs of a fairly big city and have never–NOT ONCE in the 16 years I’ve lived here–seen a coyote. Off-leash dogs, yes. Raccoons and possums, yes. Coyotes, not so much.
* Kittens should never be outside, and these in particular because they’ve never been outside. They don’t know how to be outside. (As if I’m going to toss the kitten in the front yard and let it fend for itself.)
*Indoor only cats live longer.
*Besides, they don’t know what they’re missing.

Whether you believe the same way as this volunteer regarding cats and kittens isn’t my point. But I was shocked at how closely animal rescue folks mimic helicopter parents or possibly vice versa. Have we reduced our children to the state of 4-month-old bottle-fed baby kittens? We have to keep them inside because they’ve never been outside and they would instantly become prey to wild predators? Training them isn’t even considered? Besides, depriving them of what comes naturally is fine because they will live longer and they don’t know any different anyway? Wow! –  Julie 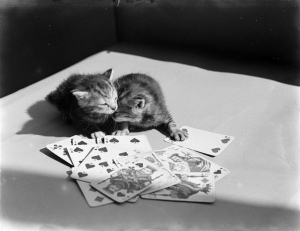 177 Responses to Kids & Kittens & Keeping Them Inside