Readers knskbaahae
— Allow me to tiptoe off topic, slightly, to print this comment that came a while back in response to “An Insane Focus on Safety, Including the Hazard of ‘Eating Bread.'” Â As you know, Free-Range is all about battling hysteria when it comes to the idea that NOTHING is safe enough for our kids. When I see evidence of this beyond parenting, I realize our mission, more broadly, is to fight back the creeping conviction that only by non-stop focusing on safety and its handmaiden, DISASTER, can we be considered responsible.

Which is a long way of saying I really loved this comment.

Dear Free-Range Kids: My workplace has an unhealthy obsession with safety, so much so they built an automated system with only two real functions:Â

1 – Submit “Hazard Detection Forms” –HDFs — a tangle of paperwork where you list a threat to life and limb you witnessed and how to make sure it never happens again.Â 2 – Submit our timesheets. We’re contract and outsource types, so it’s all about billable hours. No timesheet submitted, no money for the company, no paycheck for you.There was always an unofficial quota of 2 HDFs per month. Everyone thought it was a pain, but most of us office drones ignored it. It was more for the field guys, you know? Guys who spend their days in the guts of chemical or power plants, or driving out to God-knows-where to muck about with nonfunctional gas lines. They could make two a month easy: Hell, see one bear and one car accident by the side of the road during the 4 hour commute and you’re set. Hell, if you find an improperly tagged valve you can do your job AND fill out an HDF all at the same time. But us? Not really. 40 of us crammed into a tiny office on the border of suburbia and urbia? The biggest danger was knocking someone when you moved your chair back to get up. Any threat to life and limb would be spotted and fixed before you knew it.We were berated in every one of the fortnightly safety meetings for not “pulling our weight,” getting ranted at by the company Napoleon about how the office is the deadliest environment in the world, more so than an ice-slick catwalk in January. (No, really, he said that.) Apparently in an office, complacency is the Great Satan. When you’re within spitting distance of a phosgene line you’re damn well careful, but in an office you won’t see the danger until it gets you: Spilled water on the floor, asbestos in the walls, a mountain lion popping up in the server room…. Offices are killers! You must always be alert!A few months back, Napoleon went on the offensive: Now, you HAVE to submit two HDFs a month or get locked out of the automated system. Get locked out, can’t submit timesheet, don’t get paid for your work until you fill out the safety paperwork and are allowed back in. Our paychecks are essentially being held hostage once a month until we prostrate ourselves on the altar of Safety.

So, of course there’s now a metric ton of BS flying as 40 people try to find threats of mayhem over the same quarter of a city block. If you went by reports you’d assume this quiet little building and parking lot is home to half the city’s spilled beverages, dropped nails, diseased rodent sightings, lamps and heating elements by curtains, near-miss car crashes/hit-and-runs, dropped extension cords, leaky gas and oil tanks, violent homeless guys, etc.

It’d be safer in Kandahar than this horrible place that our HDFs have built. – Office Guy 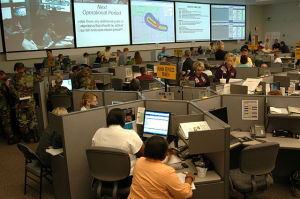 It’s a wonder anyone gets out alive!

Xmas Gift? A Kit That Saves Your Child’s Scent for the Search Dogs
Weekend Viewing: Nancy Grace, Casey Anthony, Aaron Sorkin and Us

46 Responses to Letter That Made Me Laugh (About “Workplace Safety”)