Hallelujah! bfrdtakrfn
Danielle and Alexander Meitiv have been cleared of any wrongdoing in the Dec. 20 incident when they let their kids walk home from the park in Silver Spring, MD. Â As Donna St. George in the Washington Post reports:

A Maryland couple investigated for neglect after they let their two young children walk home alone from local parks have been cleared in one of two such cases, according to the familyâ€™s attorneys and documents.

The new Child Protective Services finding, which follows an appeal, comes as the experiences of â€œfree rangeâ€ parents Danielle and Alexander Meitiv have drawn national attention, sparking debate about parenting choices and how far local officials should go to enforce laws designed to protect children.

It overturns a previous CPS decision that held the Meitivs responsible for â€œunsubstantiatedâ€ child neglect, a finding typically made when there is conflicting or insufficient information for a more definitive conclusion.

The change came as a welcome surprise to the Meitivs, who were informed in letters they received May 18 that neglect was â€œruled outâ€ in the case, which dates to their childrenâ€™s December walk from Woodside Park.

â€œIt was an enormous relief and vindication,â€ Danielle Meitiv said in a Washington Post interview, the familyâ€™s first in six weeks. â€œOf course thereâ€™s no neglect here. There never was. There was never even a hint of it.â€

While strike one against them is now gone, strike two remains to be dealt with: That’s the time they allowed their kids to walk home from a local park yet again — the little recidivists. Â The kids were held for five hours, and the authorities didn’t even notify the parents until about three hours in.

Danielle Meitiv said she stopped giving interviews April 13, both at the advice of lawyers and because the most recent experience became upsetting to talk about.

She said sheâ€™s speaking out now in hopes the new ruling may assuage the fears of other parents who want to let their children venture outdoors to walk or play, but are worried about CPS involvement. â€œItâ€™s also really good news,â€ she said.

The Meitivs advocate free-range parenting, which encourages independence and exploration. The term was first coined in 2008 by New York journalist Lenore Skenazy, who developed a following for pushing back against what many saw as a hypervigilant â€œhelicopter parentâ€ culture.

Actually, at this point that New York journalist would like to clarify that she is not pushing back against helicopter parents — she feels parents can raise their kids however they see fit. She is (I hear) pushing back against an entire culture that sees children only through the lens of danger, trauma and fragility, which then tends to overreact to any threat, no matter how remote.

But first, a woot of joy for justice, and for kids everywhere. Why not celebrate by having them walk to school today? – L 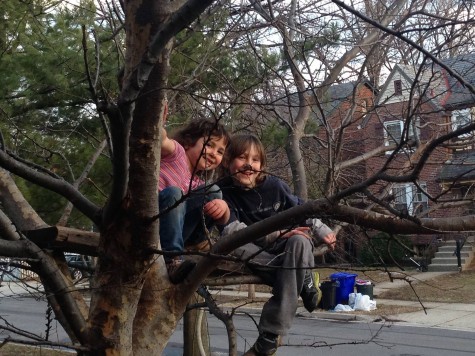 The Meitiv kids — no longer up a tree!Â