Here’s a handy-dandy post to whip out when someone screams at you for letting your kids wait in the car during an errand. (Did you know Free-Range Kids is a free app? That’s how you can whip this out):

Last yerydterhd
week, my preschooler came literally within an inch of his death in a shopping center parking lot.

I don’t know what made that SUV driver stop backing out a split second in time–my blood-curdling scream or the God-sent invention of the back-up camera.

I just know that my kids would have been a lot safer if I’d just run into the store alone to get the milk.

Risk is complicated stuff requiring moment-by-moment discernment from parents.  Had it been a 90-degree day, the risk-benefit ratio would have favored me bringing the kids in with me.  But on a rainy day in a low-crime neighborhood, I’m certain that had I let them wait in the car–judgment from others be damned–I wouldn’t have found myself sobbing hysterically on the sidewalk and hugging my confused little boy.

The Rhode Island legislature wants to take away from parents the right to make their own safety assessments.  But after my son’s close call, I’m concerned that this legislation will end up taking more lives than it saves.

Anything that takes away a parent’s right to be rational and instead enforces hysteria is a law that should not exist. Turns out that yesterday the Rhode Island legislature only had a hearing on the bill to criminalize parents for letting their kids 6 and under wait in the car for more than 5 minutes, even if accompanied by someone age 13.  That means the bill is still pending. Please consider signing the petition that would keep the state from forcing parents to drag their kids out of the car only to satisfy some legislators’ incorrect assumption hat kids waiting a short time in the car are in immediate peril.

And by the way, here is a chart from KidsAndCars.org where you can see that four times more children die in rollovers and backovers, than from heatstroke in the car. (And those who DO die in the car have usually been forgotten there for hours, not left there for a few minutes while mom grabbed the milk.) Let rationality reign!- L. 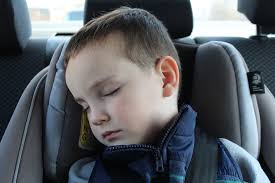 Four times more children die from rollovers and backovers than from heatstroke while in a parked car. (Source: KidsandCars.org )

Year in Jail for Letting Kids Wait in Car During Errand? Rhode Island Legislature Votes Today
Cops Mistake Dad for Kidnapper as He Puts His Kid in His Tesla