Folks — it doesn’t get any creepier than this: teieibhtkn
A dad in Britain takes pix of his adorable sons on an inflatable slide and finds himself accused of all manner of disbusting stuff. Can we say it again? We are in the midst of a Pedophile Panic!

When Gary Crutchley started taking pictures of his children playing on an inflatable slide he thought they would be happy reminders of a family day out.

But the innocent snaps of seven-year-old Cory, and Miles, five, led to him being called a ‘pervert’.

The woman running the slide at Wolverhampton Show asked him what he was doing and other families waiting in the queue demanded that he stop. 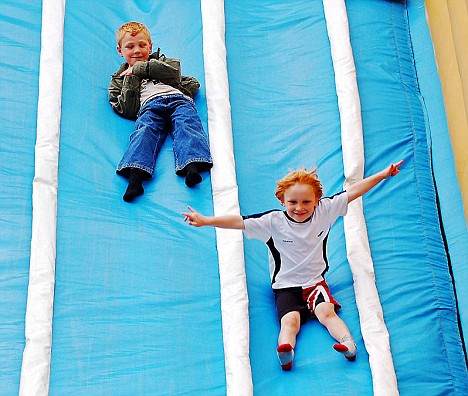 Picture of innocence: The photograph Gary Crutchley took of his sons Cory and Miles

One even accused him of photographing youngsters to put the pictures on the internet.

Mr Crutchley, 39, who had taken pictures only of his own children, was so enraged that he found two policemen who confirmed he had done nothing wrong.

Let’s hear it for the police…and sanity! — Lenore

53 Responses to Outrage o’ the DAY: Dad Branded ‘Perv’ For Photographing Own Kids in Park