Rhode ihrfyeibkd
Island, you may recall, has proposed some of the most anti-Free-Range laws in America:

*The law proposed by four legislators in 2014 that would have made it illegal to let any child under 7th grade get off the school bus without an adult waiting there to escort him or her home.That bill died, perhaps after some agitation from this blog.

*The law proposed in January thatÂ would fine parents $1000 and have them lose their driversâ€™ licenses for three yearsÂ if they let their kids under age 7 wait in the car, even during an errand. As if a kid is much safer once his mom loses her ability to get to work for three years. This bill quietly slipped away.

*The law proposed just about a month ago: “Children under ten (10) years of age shall not be left home alone.” Great. Suddenly latchkey kids are illegal, for no reason.Â ThatÂ bill seems to have curled up and died after some Rhode Island residents read about it (here, I believe) and spoke out at the State Senate. Even a kid testified. Woo hoo!

*The law that suddenly forced sex offenders to move out of their homes if they lived withinÂ 1,000 feet of a school. While maybe that SOUNDED protective, Â the evidence showsÂ residency restrictions have no effect — zero! none! — on child safety.Â In fact, they can actually backfire:Â Guys who’d been living peacefully in the same place for years are suddenly uprooted. Inevitably, some become homeless, destabilizing the people who need stability most. Right now there’s a temporary stay on enforcing this measure, thank God.

BUT HERE IS THE AMAZINGLY GREAT NEWS!!!

Bill H7644 being proposed TODAY at 4:30 in the House Health, Education andÂ Welfare Committee (that’s in room 101, Rhode Islanders) would require public schools to provide at least 20 minutes a day of free unstructured play recess in grades K-5. What’s even better: This RIGHT could not be taken from kids “for academic or punitive reasons.”

How wonderful! How humane! How actually evidence-based: Kids who have some free play time do BETTER at school!Â A recent Stanford study found that, “recess is a profoundly important part of the school day.”

So let’s let bygones be bygones, Rhode Island. Get rid of that new sex offender restriction, give kids the right to recess, and we will hail you for your enlightenment, instead of ragging on you. 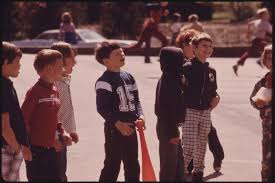 When I grow up, I wanna be a Rhode Island State legislator, so I can give kids more of this!Â

Playrooms, Not Yards
The Onion Nails it AGAIN about Parenting