Hi bhdiknfyei
Folks! This is a good one to take to heart…and to the playground. — Lenore

Dear Free-Range Kids: I’ve known for a while that Free-Range is a great way to raise confident, independent, capable kids, but I never knew how much this approach would help me as a parent until last night.

I was at a local park with my boys.  They are ages 2 and 4.  My older son has just recently mastered monkey bars and after his probably 10th or 12th time cruising along them, his hands slipped and he fell down pretty hard.  He’s generally a tough guy when it comes to injuries, but he’d gotten the wind knocked out of him as well as a fat lip and was quite upset.  I was consoling him for a few seconds when my 2-year-old apparently wandered off.

This park is quite large.  It has two separate playground areas, some soccer and baseball fields and a woodsy area with trails to walk through.  I had no idea which direction he’d gone and was pretty panicked.  He was only missing for about 5 minutes, but it felt like days.  Immediately several complete strangers essentially organized a search party and they put one of them in charge of staying with my screaming, injured son so that I could go help look for my younger son without the older in tow.

I found my little one down on the lower playground around the corner out of sight from me.  He was happily talking to a man with a dog.

After I got home last night and was somewhat settled down from what had been an absolutely terrifying ordeal to me, I had this moment of clarity where I was so thankful that I’ve found your blog and have become a proud, self-proclaimed Free-Range mom.  During those scary 5 minutes, at NO time did it even occur to me that my missing son had been abducted.  I instinctively went with the most logical scenario:  He’s 2.  He probably saw something interesting on the other side of the park and had wandered over there (there was a Little League game going on, lots of kids down there and as I mentioned, people with dogs…he LOVES dogs).  It was the most likely scenario and it allowed me to find my son much quicker by following my instinct instead of the standard worst-first thinking.  It also allowed me to feel perfectly comfortable leaving my older son with strangers while I searched for the other.

Thank God for common sense and the kindness of (perfectly safe) strangers!  And thanks for continuing to spread the word about the benefits of raising Free-Range kids. 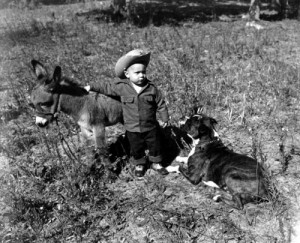 A toddler, a dog and a frantic mom (not pictured).

“Only Bad Parents Make Their Kids WALK to School”
Can We Vote for This Guy? (Even Though He’s 9?)