Readers siihiffear
— It’s kind of amazing to hear all the reasons we can’t trust our kids to be smart, safe or competent. As Peter Gray puts it in his book, Free To Learn, “I doubt there has ever been a human culture, anywhere, anytime, that underestimates children’s abilities more than we North Americans do today.” More proof:

Dear Free-Range Kids: I stumbled upon your book while reading an article about a woman who was arrested for letting her 7 year old walk to the park alone, and I wholeheartedly agree with re-normalizing childhood. It’s sad that I live in a neighborhood with tons of kids but you never see or hear any of them. It’s also sad that being a normal, non-paranoid parent is practically criminalized!

A 10-Year-Old Goes to the Public Bathroom

I’ve spoken to my sister about how I think kids need freedom on two occasions. The first was when my mother recounted how a fellow grandmother was watching her 10 year old granddaughter. The granddaughter went to the bathroom without telling her grandmother, and the grandmother didn’t notice the girl was missing until the girl came back. When the girl’s mother found out she was furious. My sister agreed that the girl’s mother should have been furious.

I asked, “Why? The kid is 10 years old. She went to the bathroom. Ideally, she should have told the grandmother but it’s not a big deal.” I got the response, “Who knows what could have happened?!”

I agree! What if the girl forgot to wash her hands???? I tried to bring the threat into perspective. The girl was at a community pool inside a gated community. Supposedly, there’s somebody that lives there that’s a registered sex offender. Okay, valid concern. [Lenore here: See this article. Majority of registered sex offenders do not pose a threat to kids.] But a 10 year old *should* know not to go off with strangers and to scream for help and, for Pete’s sake, the man would have to take her out of the club house unnoticed. This is the first time I got the argument, “But some people freeze!” (when presented with an overwhelming threat).

Don’t Trust Your Kids Around Anyone

The second time my sister used this argument, I was telling her how I was proud of my daughter for standing up for herself and setting a clear line with her pediatrician. The doctor poked her in the belly to make her laugh and my daughter giggled but she set a clear line, “Don’t touch my private parts.” The doctor took it in stride and said, “I can see she’s well trained.” It was a proud, reassuring moment to me that my daughter listens to what I teach her and is confident enough to say NO.

My sister said that even if you teach a child what to do you will never know how they will react when actually faced with that danger and “Some kids freeze!” I have no idea the intention behind her saying this except to negate my belief that you can keep kids pretty safe by preparing them for things they might encounter.

I agree you’ll never know for sure how a kid will react until they’re actually faced with that danger, but I wholeheartedly feel that if we identify potential threats to children and prepare them with the knowledge of what to do when faced with that threat then it won’t seem so scary or overwhelming and they’ll be less likely to “freeze.” What is your opinion on this? What is the best response to “Some kids freeze!”?

Lenore here: My best response is to say that what you are doing is the job of all parents: Â Preparing your kids for the world. The old saying is, “You can’t prepare the path for your children, so you must prepare your children for the path.” Your sister thinks parents should be there, clearing the path, every day, every place, every second, and what’s more, she believes that if a parent isn’t, the child will be in grave danger.

This outlook is delusional, demoralizing, dumb and unique to this moment in history (parents never had the luxury to do everything for their children until families were small and free time abundant). But that’s hardly the pithiest response, so here I open it up to you brilliant readers! Come up with some retorts that might move the needle! Â 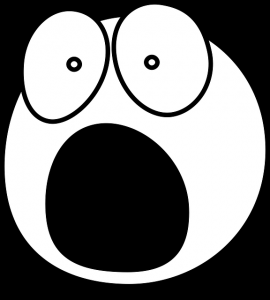 We have nothing to fear except our kids freezing in fear itself?

52 Responses to “Some Kids Freeze in Dangerous Situations!” Your Response to this Fear?