May 13, 2015
For brhhnbdres
every action there is an equal and opposite reaction. And for every over-the-top, worst-first, “If it saves one child…” law passed, there are about a million children imperiled and families discombobulated. Or so it seems from my perch. Read this note from a reader. She wrote in response to Monday’s post about the NJ Supreme Court mulling whether a parent who lets her child wait in the car even for a few minutes shall be deemed guilty of child abuse.

Dear Free-Range Kids:
A little perspective (from in NJ, even). Yesterday, as I was leaving to meet my kindergartener’s school bus (because she is not allowed off the bus UNTIL THIRD GRADE if someone isn’t there to meet her), thunder rolled in and the sky opened up. No one was home, so I had to take my 2-month-old baby with me. I drove the car the two blocks to the bus stop in the interest of keeping the sleeping baby dry. When the bus rolled up, I got out of the car and walked 50 feet away so they would release my 5 year old to me.
Â .
The state would prefer, it seems, that I take the sleeping baby out with me, let her get soaked by the rain (and, if we’re playing this game, possibly hit by lightening), rather than what I did, which was leave her in the car with the windows cracked for the few minutes it took me to retrieve her sister.
Â .
Also yesterday, the NJ legislature signed into law a statute making child safety seat guidelines law. ItÂ is vaguely written (what a surprise), but here is a link explaining it:Â http://www.thelakewoodscoop.com/news/2015/05/nj-amends-states-child-passenger-restraint-system-and-booster-seat-law.htmlÂ .Â I’m reading it to say that a child has to meet both criteria (age and weight) to move out of a rear-facing seat. This would mean rear-facing until age 2, no matter what size, and then staying rear-facing until they’ve maxed out the seat capacity. The seats my kids are in are approved for rear facing up to 40 lbs, and my kindergartener is only 35 lbs right now, so at a few months shy of 6 she would — I think — still be rear-facing. The law also has them in a booster until age 8 and 80 lbs. At her current size, she’s going to be well under 80 lbs at age 8.
Â .

Lenore here: The carseat laws do seem incredibly confusing, considering they are written for parents, not lawyers. But the way I read them, a child over age 2 isÂ allowed to sit forward, provided she’s in a 5-point harness. Anyway, the main issue — whether is it neglect to actually be separated from your child for a few minutes — is the one that is making me crazy. Let’s hope your Supreme Court realizes that LOVING, CAREFUL parents make decisions like yours EVERY DAY. It’s called “real life,” not “abuse.” – L
. 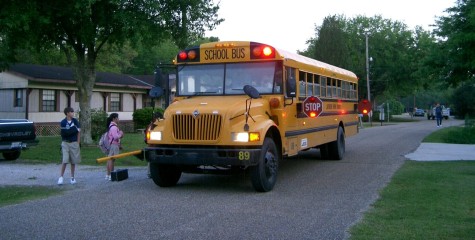 Parents MUST be at the bus stop AND must not leave their other children alone. Hmm.

Puppies, Predators, Parks, Paranoia, The BBC…and Me
TV Anchors: No Children Were Harmed But They COULD Have Been, So Let’s Look Angry & Worried

123 Responses to Thanks, New Jersey, For The Child Protection Laws That Are Driving Me CRAZY