Shocking as it sounds, two parents recently entered a restaurant, placed their baby in his carrier in a booth, and proceeded to get their food from the buffet.

That’s what another patron thought, whipping out his weapon of choice, a cell phone. Here’s the video:

And yrsdyszkff
so, reports She Knows:

…An Ohio couple is embroiled in controversy and being investigated by child services after a stranger at a local buffet recorded them leaving their baby sitting in his car seat while they went to grab their food.

The incident happened at a Chinese buffet near Sandusky, Ohio. The parents came into the restaurant with their baby still in his car seat. Rather than unbuckle him and try to juggle a baby and a plate, they opted to leave him strapped in and resting in the booth at their table while they quickly grabbed their meal. The mom says she had her eye on the baby the entire time, and he was never in any danger. But a man sitting near them saw the situation quite differently.

The nosy stranger whipped out his cellphone and immediately started recording the baby and muttering about how the mom left the child alone. He shared the video on his social media accounts, where it quickly amassed more than 4 million views and sparked a huge backlash against the parents.

The video has since been taken down, but now even the police are involved. They’re investigating the couple and trying to determine whether or not the baby was at risk.

Excuse me, officer, I can solve this.

The baby was not at risk.

Why does this even require “investigating”? These parents did not abandon their child in the Serengeti in a carrier made of beef jerky. They did not leave him at home for three days with nothing but a Zip-Loc bag of Cheerios dusted with heroin. They did not dangle their child from a balcony, nor sail him down the river in a basket of reeds. (I hope cops investigated THOSE parents.)

The parents had an eye on the kid â€” in fact, they claim the man who recorded their baby intentionally angled his phone to make it look like they were out of sight so the situation would appear worse than it actually was.

What’s fantastic is that it feels as if the tide may be turning against the blamers and shamers. The cop interviewed about this “incident” (and remember, “incident” means nothing actually happened) said: “Can we say because the parents walked out of the screenshot and left the child unattended in the booth that there was a significant risk of injury to that child? I’m not sure we can ‘What if?’ and say all these horrible things could have happened.”

Right on! He sounds like a Free-Ranger! He also sounds like the New Jersey Supreme Court. (See this story.) The only thing I’d add is that a child is NOT unattended when he is at the same restaurant as his parents.

Today, Minnesota Public Radio is doing a whole hour on the issue of parent shaming (9-10 a.m. Central Time). I’ll be on it, and I’ll be quoting She Knows and the cop. And maybe, for fun, the muttering videotaper. – L. 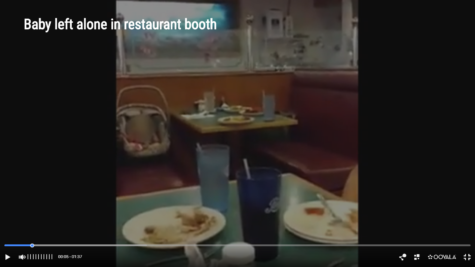 What kind of crazy parent goes to a buffet before their kids are full grown?

69 Responses to Viral Video: Parents Left Their Baby in a Diner Booth While They Grabbed Their Food!