If you have a child who is very sick, Â you will move heaven and earth to get that kid care. Unfortunately, there’s a possibility that this assiduousness will trigger suspicions of abuse. In a horrifying dhynzrsryn
yet supremely well documented oped in today’s New York Times, the mom of a girl who suffered from inexplicable headaches, nausea, falls and pain, explains how others in her situation end up with their kids taken away by child protection system all too ready to see “medical child abuse” where none exists:

Compounding the problems with the overly broad definition of medical child abuse is the considerable misinformation spread by its proponents. In 2013, a governorâ€™s task force in Michigan stated that â€œmany cases of Medical Child Abuse go undetected because caregivers are skilled at deceiving the medical community.â€ No hard evidence, however, suggests that such parents are anything but rare. Medical child abuse is far more likely overcharged than undercharged.
Â .
The task force identified these warning signs of medical child abuse: a â€œhighly attentive parentâ€ who is â€œunusually reluctant to leave his/her childâ€™s sideâ€; a parent who â€œdemands second and third opinionsâ€; a parent who â€œis not relieved or reassured when presented with negative test results and resists having the child discharged from the hospitalâ€; and a parent who has â€œunusually detailed medical knowledge.â€ These warning signs accurately describe many, if not most, loving parents of medically fragile children.
Â
In its zealotry, the medical child abuse movement resembles two other panics from the recent past: the sex-abuse panic of the 1980s and 1990s and, more recently, the panic over shaken-baby syndrome. In both panics, experts saw foul play where none existed, government officials took their views at face value, and people were wrongly convicted and imprisoned, their lives ruined. Medical child abuse is causing similar harm.

I added those links and boldface.
.
The author of this piece, Maxine Eichner, a professor of law at the University of North Carolina, recounts possibly the most outrageous case of government hysteria/cruelty regarding a very sick child:

…Justina Pelletier [was] a teenager who was being treated for mitochondrial disease, or â€œmito,â€ a rare metabolic disorder that interferes with energy production. On the advice of a metabolic geneticist at Tufts Medical Center who was treating her, she was admitted in 2013 to Boston Childrenâ€™s Hospital, so that she could see her longtime gastroenterologist, who had recently moved there. Without consulting the girlâ€™s doctor at Tufts, Boston Childrenâ€™s concluded that the girlâ€™s problem was not mito, but largely psychiatric, according to The Boston Globe.

When her parents disagreed and sought to transfer her back to Tufts, Boston Childrenâ€™s called child protection, asserting that the parents were harmfully interfering in her care. Although the Tufts geneticist supported the mito diagnosis, a juvenile court judge deferred to Boston Childrenâ€™s assessment, and Justinaâ€™s parents lost custody. After more than 16 months in state custody, much of it spent in a locked psychiatric ward, Justina was finally returned to her parents â€” still in a wheelchair, still sick.

What does this have to do with Free-Range Kids? Everything. The whole premise of this movement is that our children are not in constant danger — not from kidnapping, not from unfingerprinted school volunteers on a field trip, not from crayons (this week’s New Fear), and not from parents at their wits’ end.

Eichner discusses Munchausen syndrome by proxy, whereby some parents may exaggerate or even create their child’s illness to get attention. But she puts it in perspective: It is exceedingly rare. We talk about it (and see it on TV) for the same reason we talk about Satanic child abusers — it is so outrageous. But being outrageous doesn’t make it common. It is certainly far less common than frantic parents trying to help children with difficult-to-diagnose illnesses.
As a society, we sometimes seem determinedÂ to imagine anyone having anything to do with kids — including their own parents — as monsters. This is what happened to the Meitivs in Maryland: The parenting decisions they made out of love and rationality were interpreted as harmful. The real monsters today are the ones who see “child abuse” even when staring at kind, compassionate adults. Â – L.
. 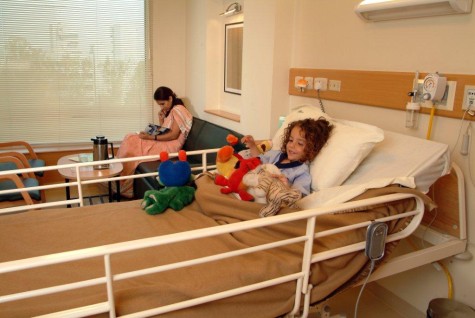 We are feverish with fear.Â