Yesterday I ran anÂ interview dsrzitfyeb
with the Florida momÂ whose children were removed from their home for a month after a neighbor reported the family to Child Protective Services because their 11-year-old son was left outside by himself for 90 minutes.

This story is so incredible, some people almost can’t believe itâ€”and I can see why. It is as crazy as Maryland’s Child Protective Services accusing Danielle and Alexander Meitiv ofÂ negligence for letting their kids walk home from the park in Silver Spring. Unfortunately, sometimes this kind of thing happens. But when it is sufficiently publicized, change can happenâ€”which is why publicizing these cases is important. And in fact, as Donna St. George reported in yesterday’sÂ Washington Post, Maryland’s CPS has justÂ issued new guidelines, saying,Â “Children playing outside or walking unsupervised does not meet the criteria for a CPS responseÂ absent specific information supporting the conclusion that the child has been harmed or is at substantial risk of harm if they continue to be unsupervised.â€

I hope this starts a trend.

The parents from yesterdayâ€™s storyâ€””Cindy” and “Fred”â€”want their anonymity preserved. They donâ€™t want to provoke the government officials handling their case, and Cindy has very real concerns that she would lose her job if her identity was revealed. But to quell the idea that this couldn’t have really happened, here is page 1 of the county court documents ordering the children to be removed from their home. (I blacked out anything I thought might reveal their identities. The full, unredacted document has been viewed by Reason editors.)

David DeLugas, an attorney with the National Association of Parents, spoke with Cindyâ€™s attorney and has confirmed the story she told me, in part by viewing documents relating to the case on an online clerk of courts website.

After this legal mess is safely behind her, Cindy may talk to the pressâ€”or not. Right now, the kids are back with their parents, but the family remains in limbo. At yesterday’s court appearance the judge instructed the familyâ€™s lawyer and the prosecutor to try come to a mutual arrangement and return to court at the end of the month.

These parents may ultimately choose to remain anonymous. But they are not alone. We cannot expect or demand perfect parenting as the only legally acceptable behavior, especially in cases like this one, where no children were hurt or even in danger of being hurt.

We all have days when plans go awry. RememberÂ this story? The British Prime Minister accidentally left his 8-year-old daughter at a pub! 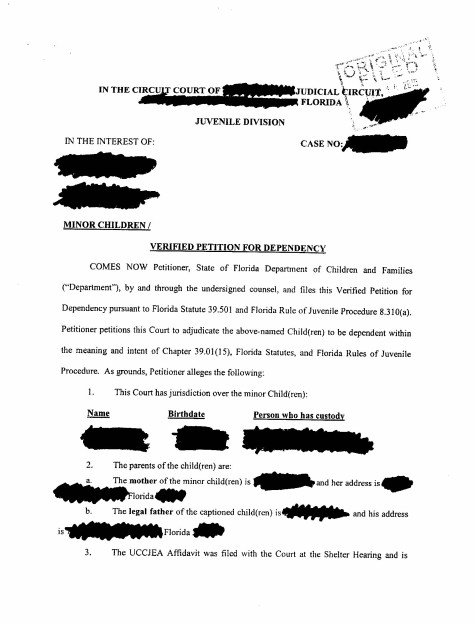 Interview with the Mom Whose Kids Were Taken Away After Son was Seen Playing Alone in Yard
Why Do I Keep Scaring People With Stories of Good Parents Hounded by the Authorities?

106 Responses to More About the Florida Kids Taken Away Because The Boy, 11, Was Playing Alone in His Yard