Readers — Maybe it’s Malaysia that is the land of the free and the home of the brave. This tnnkftafka
7th grade boy, Nayati, sure embodies all that — along with a shining optimism.

The story (as far as I know) is this: Nayati was recently kidnapped by two men and held for six days, then somehow (I have no idea how) returned to his home and his community. His school called a special assembly and unveiled the surprise guests to the kids: The boy and his parents! Then, according to the blog Global  Anni, run by an ex-pat teacher in Kuala Lumpur:

Well the standing ovations and tears would not stop! He came down off the stage and walked up the theater steps into the audience and hugged all his classmates, teachers and parents. He then walked down the row of seats where the 7thgraders were sitting and took a seat among his peers. Many of us have still not stopped sobbing.

When the assembly was dismissed, Nayati walked to our breezeway and continued to hug and thank everyone. His father tweeted that Nayati had decided to walk home from school. Holding his friends’ hands he walked right past the place he had been abducted 6 days earlier and went home to hang out with his buddies.

I’m cheering, too. What a boy, what an outlook. And what  a great school that allows him to continue being a confident kid! — L. 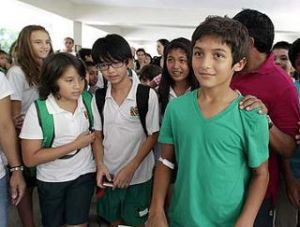 Help Needed: My Husband Doesn’t Want My Girl to Play Outside EVER
Third Annual “TAKE OUR CHILDREN TO THE PARK…AND LEAVE THEM THERE DAY” coming up SAT., MAY 19!