This post comes to us from the amazingÂ appellate and intellectual property attorney at Andrews Kurth LLP, Matthew ftadkzhbay
Dowd,Â whoÂ took on the Meitiv cases(s), pro bono, and won! Â He says he now gets to sleep in sometimes because his 11-year-old son and 7-old-daughter walk themselves to school.

Building on the Every Student Succeeds Act, by Matthew Dowd

On January 10, 2016, the Every Student Succeeds Act became law of the land.Â  Lenore Skenazy [woo hoo!] has rightfully praised the new law as the â€œfirst federal Free-Range Kids legislation.â€Â  The Act is an excellent indication that our federal lawmakers recognize the serious problem of local social service agencies and police departments prosecuting parents who allow their children to play outside.

But itâ€™s important to understand what the Act does and does not accomplish. Â On the positive side, it establishes that the U.S. Dept. of Education cannot â€œprohibit a child from traveling to and from school on foot or by car, bus, or bike when the parents of the child have given permission.â€Â  Nor can the Department “expose parents to civil or criminal charges for allowing their child to responsibly and safely travel to and from school by a means the parents believe is age appropriate.â€Â  The law effectively minimizes the chances that the Department of Education will come after parents who allow their children to enjoy healthy time by themselves.

That, however, was never the real problem. Almost all child neglect issues are controlled by state and local lawsâ€”not federal law.Â  And the law will have absolutely no impact on the many horror stories Lenore highlights here.Â  It cannot prevent state and local authorities from interfering with and harassing parents who are raising their children in a responsible manner, such as the Meitivs, the Hypes, and Natasha Felix.

– Ask your local officials, such as your mayor, councilperson, and HOA representative, and your PTA: What is being done to encourage children to play outside and experience age-appropriate independent development?

– Better yet, have your children write to them!

– Invite a speaker on Free-Range parenting to a neighborhood or school event.Â  Lenore Skenazy and Danielle Meitiv are both excellent!

– Talk to your friends, and encourage them to let your children play together outside by themselves. Â Start small and then grow.Â  Consider the Free Range Kid Project.

The key to effecting real change lies in our neighborhoods.Â  The problem of helicopter parenting started locally, and it needs to be solved locally.

Lenore here: When you do any of these things, please tell us how they go! Here’s to movement movement! 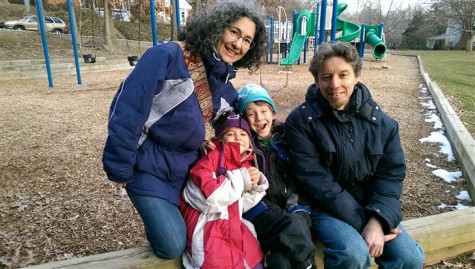 How can we prevent local authorities from arresting Free-Range families?

Cory Doctorow on “New Law Says Kids Can Walk to School by Themselves”
“Let Them Go!” — The Meitiv Family Anthem